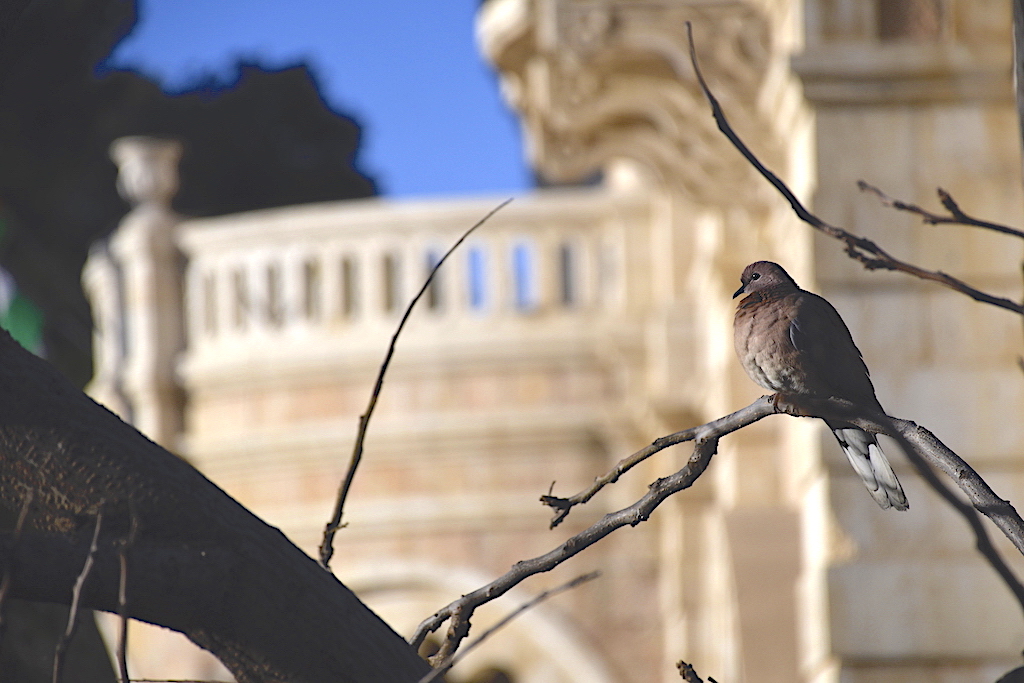 Editors note: This is the seventh in an Adult Forum series on the Beatitudes, a class with Pastor David E. Mueller. We meet at 10 a.m. on Sundays (between the 9 a.m. service and the 11 a.m. service). Join us in the Great Room!

“Blessed are the peacemakers, for they will be called children of God.” (Matthew 5:9)

Traditionally, military personnel wear uniforms, which identify their nation, the service they represent and the rank they hold. They are paid; it is their job as well as their duty. Their purpose is to kill enemy combatants in the event of a war and be ready in the meantime.

Peace “freaks” and “niks” are often viewed as scruffy folk, young and old, who hang out in public places displaying signs and shouting slogans. They often appear as if they do not have anything better to do or cannot find reasonable work. If they do work, most do not use their lunch hours to protest. If they did, they would most assuredly not be wearing expensive business suits. “Peacemakers” seem to have an image problem.

I am fully aware that in all the Beatitudes, there are political ramifications, especially to this one. With wars going on, most of us have serious and sincere political opinions. Most Christians of any depth do NOT want to hear partisan political posturing from the pastor. I will not violate that boundary this morning. My political, military and other opinions are not the point here and neither are yours. If a genuine and complete peace is what we seek, then it is God’s and not our will which must be discovered and heeded.

Our task today is not to discuss peace keeping but Christian peacemaking. THIS IS NOT OPTIONAL! Mercy was the last thing known and shown before reaching the top of the holy hike and seeing God. Mercy is what flows with us as we descend back to the valley below. To refuse peacemaking obligations for the Christian is no less a failure in duty than a soldier refusing to fight. In both cases, it is cowardice.

I have to believe that those who have faithfully climbed and seen God are now descending with a powerful and beautiful sense of God’s presence and promise, short-lived though the audience may have been, and terrifying as it may be to face what lies below. As we descend, peacemaking as children of God is far removed from what is usually thought to be peace. The world at war will refer to us by all kinds of names, but “children of God” is not one of them. All periods of world history involve war.

Christians are not to be striving for the absence of conflict or for simply treating a particular tension. Peacemaking is both the most difficult and dangerous exercise there is. The dangerous part we will need to address next Sunday. The difficult part is that peace, by Biblical definition, has to do with all and not some aspects of life. It is, therefore, very long and hard work. It is comprehensive!

War can be waged on the ground, in the air, or at sea. Peace is to be in relationship to everything. “Shalom” in Hebrew; “Salaam” in Arabic; “Pax” in Latin; “Erineis” in Greek, all speak of peace in every way, in everything with everyone, even if those who use those languages have difficulty equal to our own in achieving it.

It is especially difficult and demanding for Christians to be called upon to make peace where there exists conflict: between nations, neighbors, spouses, races, political parties.

Imagine the six-pointed “Star of David.” Peace with God and with oneself in Christ is at the center of the star. To whatever point in the star one turns, there is opportunity for peace.

Every family has disputes. One could take a side, cast the problem aside indifferently, establish a tough position of one’s own, or prayerfully seek to make peace. This is true with neighbors, friends, enemies, work and schoolmates, and all other points of the star. Are we stars who shine brightly in peace or people who whine nightly in conflict?

Peace, as Jesus gives it, and as we are to make it, is not as the world gives (John 14:27) precisely because it is peace on every front. As we will note next week, much of the world’s people will despise us for being serious about achieving true and complete peace.

Christians, whether we like it or not or are called upon to participate or not, fully understand that war happens. When war is unavoidable, it must be fought with killing and not kindness. Evil is real in our world and cannot be ignored.

Today there are Christians who believe that Jesus is returning to rule the earth for a millennium either before or after a period of tribulation. I am not judging this; Christians can and do differ on Biblical interpretation and theological/ethical position. I wonder, however, why so many of these seem so merciless about the punishment to be dealt out when Jesus returns? For some, even peace is the sign that things are wrong and not right. Why then, does Paul write unconditionally, “Pursue the things that make for peace.” (Romans 14:19) What did Paul have in mind when he wrote: “If it is possible, so far as it depends on you, live peaceably with all.” (Romans 12:18) David the Psalmist sang: “Depart from evil, and do good; seek peace and pursue it!” (Psalm 34:14) Are these authors of holy writ trying to fool us?

What Christians ought to share above all else is the love of Christ, deep and abiding prayer in Christ, and the peacemaking Christ Himself has given us to do. It is this “peace that passes all understanding and keeps our hearts and minds in Christ Jesus our Lord.” (Philippians 4:7) It is the absence of this peace expressed which has caused many outsiders to be stressed about Christians. Jews can rightfully ask: where is the peace?

I served as a “Mediator” for over 15 years in the Lutheran Church-Missouri Synod. I was formally trained as a “Peacemaker.” Peacemaking is at the top of a curve, with slippery slopes on each side of the top. On the one side is “peace faking,” which at its extreme leads to suicide. On the other side is “peace breaking,” which leads to murder. Clearly in the conflicts I have been asked to mediate, neither of the extremes were realized and on occasion, genuine peace making was experienced.

Christians, who know the healing of their own relationships with God, self and others, see the potential for peace in the relationships of others as well. Some marriage partners in conflict would seem rather to kill than heal. Just read any newspaper. We know some nations at war would rather kill than seek peace. Just read any newspaper. We Christians keep believing in the “Prince of Peace,” and would rather die for him than kill. We break nothing, we fake nothing, we make peace.

The symbol of our peace is not an eagle with olive braches in one claw and arrows in the other, although I, like you, respect that symbol for what it means. Ours is not a buzzard, which feeds on death, a hawk which looks for prey, or a duck which quacks, but a dove which lights gently on hearts burning to heal in newness and life.

Luther initially wrote the tract: “Can a Soldier be saved?” because his friend, Assa von Kram, a soldier, had a conscience problem and was unable to reconcile his Christian faith with military service. Luther concluded that military service was not inherently in violation of Christian conscience. This is a decision, however, which each Christian must make in his or her heart. Some might in conscience choose not to serve and seek alternative service to military service. THERE IS NO CHOICE IN PEACEMAKING. IT IS OBLIGATORY!

Here also, is a piece of what Luther wrote in his commentary on this Beatitude: “With an excellent title and wonderful praise, the Lord here honors those who do their best to try to make peace, not only in their own lives but also among other people, to try to settle ugly and involved issues, who endure squabbling and try to avoid and prevent war and bloodshed … (others) have no other goal than to stir up unrest, quarrels and war. Thus, among the priests, bishops and princes nowadays practically all we find are bloodhounds. They have given many evidences that there is nothing they would rather see than all of us swimming in blood. If a prince loses his temper, he immediately thinks he has to start a war … they cannot rest until they have taken their revenge and spent their anger, until they have dragged their land and people into misery and sorrow. Yet they claim to bear the title ‘Christian princes’ and to have a just cause.”

Note that Luther had no patience or respect for either secular or spiritual leaders gone awry. He went on to write: “All this comes from the shameful, demonic filth which naturally clings to us.” He further pointed out how Christians must be peacemakers in both their personal and communal lives.

Things have gotten far worse since Luther, in terms of the numbers, nature and nastiness of conflicts and in the amount of damage that has been and can still be done, most usually in the name of good and not evil. This is the very nature of evil, that is, deception. Perhaps the Psalmist is most timely today as we hear: “Depart from evil and do good; seek peace and pursue it.” (34:14) Maybe Paul was right on when two millennia ago he commanded us “to pursue the things that make for peace.” (Romans 14:19)

Take peace out of the Scriptures, cut the word out every time it appears, and watch the Bible begin to look like Swiss cheese.

Unfortunately, wars and rumors of same will continue to increase. It is the nature of fallen humanity. Christians will not be blessed by being agents of conflict and war. We are told nowhere in our Bibles to go and wage war. Even President Dwight Eisenhower said that every bomb built, whether dropped or not, is bread and butter taken from the mouths of children. But there is hope and we need to be agents of peace in anticipation of it.

Possibly one of the most troubling matters these days is the apparent complicity of the Syrian Christians with the Assad regime. They seem to be saying little or nothing about injustice and violence on both sides. German Christians were similar 75-80 years ago. And what of us right now?

Listen to this: “Let me hear what God the Lord will speak; for he will speak peace to his people, to his faithful, to those who turn to him in their hearts. Surely his salvation is at hand for those who fear him, that his glory may dwell in our land. Steadfast love and faithfulness will meet, righteousness and peace will kiss each other.” (Psalm 85:8-10) 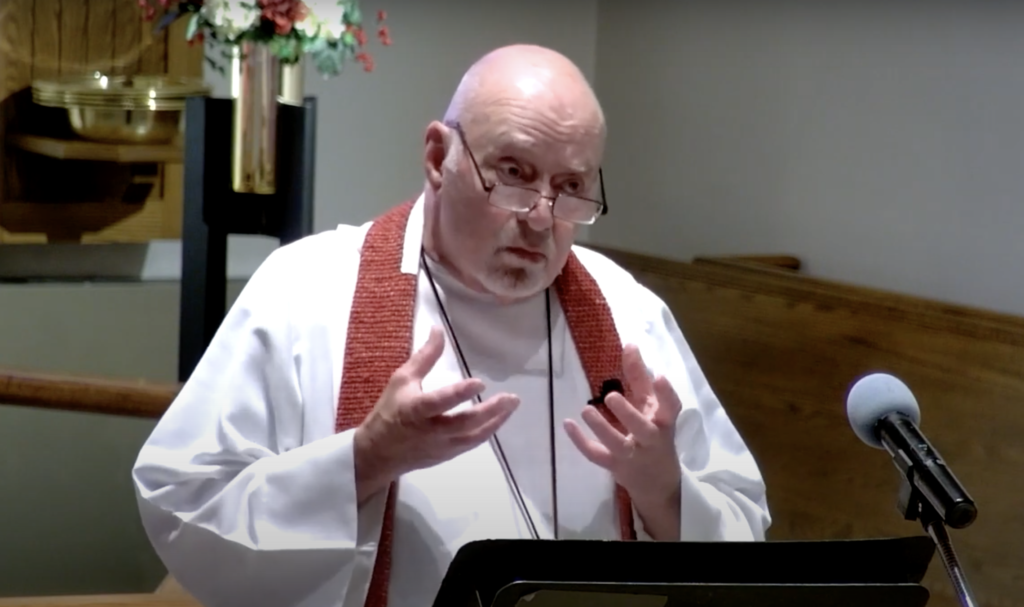 Pentecost Sunday message: ‘More on Living Water’
The image of the Holy Spirit taken from the Baptism of Jesus himself is that of a dove. Power can be calm, quiet and gentle, rather than boisterous and brutal. I always need to go on to suggest that a dove is not a buzzard. Empowerment is to enliven the heart and not eat it.

Read More
The Sanctity of Suffering: Pastor’s message for May 24
On this Memorial Day weekend, we thank God for those who have served our nation and given the ultimate sacrifice. We pray for those who suffer in body, mind or spirit. And we gather once again — together in spirit, yet from afar — to worship by way of this pre-recorded video during this time of Coronavirus pandemic. Thanks to Interim Pastor David E. Mueller, John Lasher, director of music and worship arts, and Barbara Sheridan, worship assistant, who lead us today.