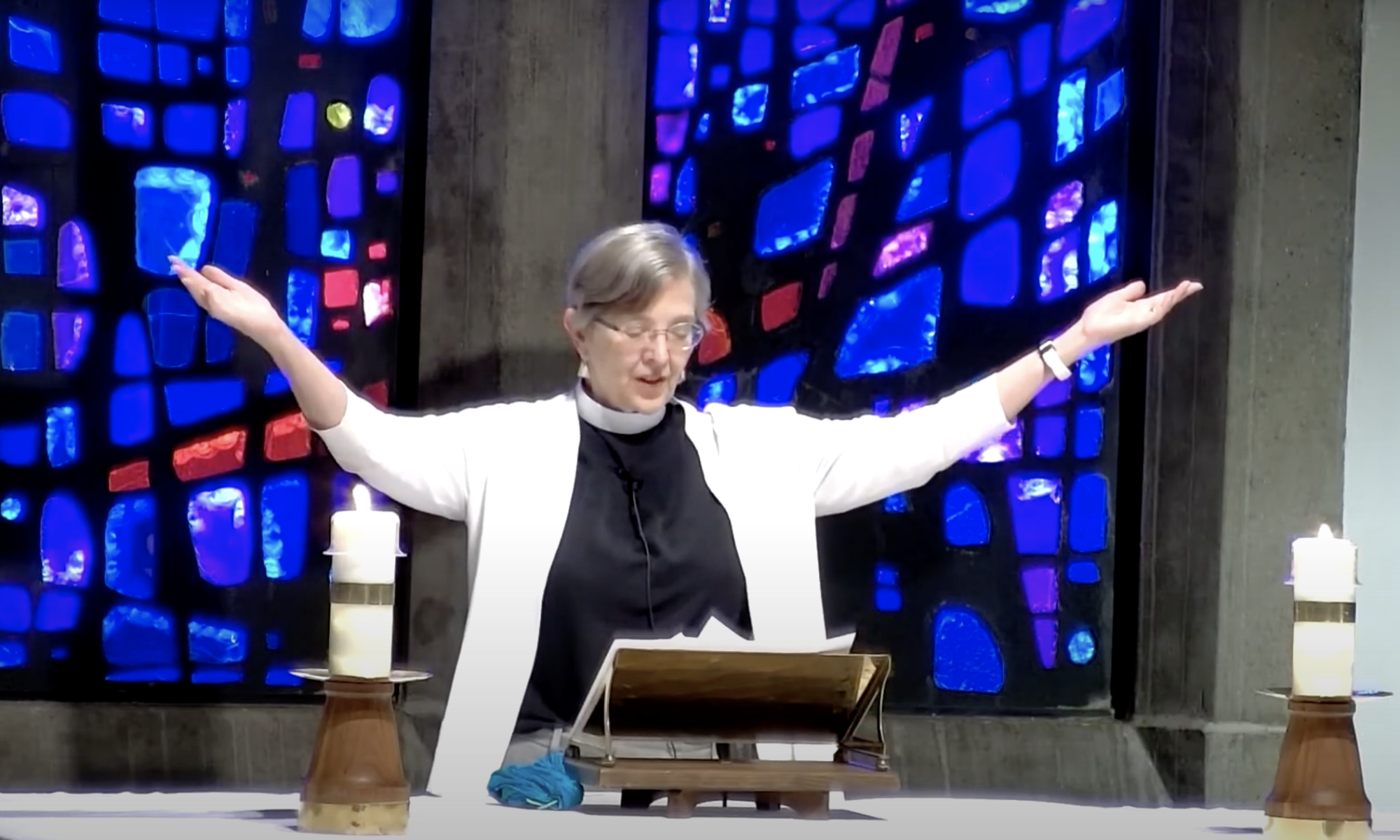 There is much to love about our prerecorded worship service today, including a guest message from the Rev. Barbara Melosh, a visit with Interim Pastor David Mueller’s menagerie, wonderful music and Scriptures.

We also have important news about our reopening day (September 6!) and a new video — starring our own Teresa Stebner and Nancy Wilkerson and produced by John Lasher, director of music and worship arts — that demonstrates the procedures that will be in place to protect the safety of all.

Our guest speaker, the Rev. Barbara Melosh, is a second-career pastor, ordained in 2005 after a teaching career (English and history) spent mostly at George Mason University. Her first call was to a small church in Baltimore city, a story told in her 2018 book “Loving and Leaving a Church: A Pastor’s Journey.”

Since her retirement in 2014 she has served as interim pastor at Grace in Hockessin, St. Stephen’s in Wilmington and Hope in New Castle. She is dean of the Delaware-Maryland Synod’s Delmarva North and Delmarva South conferences, convening colleagues for Bible study, shared ministry and mutual support.

You can access the prerecorded worship service on our YouTube channel through the link here and find the text of Pastor Melosh’s message below, too.

This question marks a turning point in the gospel of Matthew, and in the life of Jesus. It’s spoken as Jesus’ ministry is growing at a phenomenal rate—from a few people gathered from almost accidental encounters, called from their boats or, in the case of Matthew, called from their jobs as tax collectors, and now spreading like wildfire, with huge crowds that are following Jesus everywhere.

The carpenter from Nazareth has become the miracle worker of Galilee. He’s hosted a picnic for more than 5,000, out of just a few loaves and fishes, and a few days later, a replay — feeding 4,000 men, plus women and children.

Everybody’s talking about him, and Jesus turns to his disciples to check out the buzz.

“Who do people say that the Son of Man is?”

The disciples give their briefing. “Some say John the Baptist, but others Elijah, and still others Jeremiah or one of the prophets.”

So they report that some see Jesus as part of a rogue movement, those followers of the strange wilderness prophet John the Baptist. Others place him in the long line of God’s prophets known in Hebrew scripture, from Elijah to Jeremiah.

And then Peter takes a breathtaking leap. Others have called him a prophet, many have called him “Lord” — a title of honor, used for God but also for people in positions of power. But for the first time, Peter calls him Messiah — the anointed one, the long-awaited savior foretold in Hebrew scripture. “Messiah” is a Hebrew word, and in Greek that word is “Christos” — Christ. And “Son of the living God.”

A bold proclamation, pronounced defiantly at a site that the gospel’s first hearers would have recognized. The story takes place at Caesarea Philippi, located 20-some miles from the sea of Galilee, part of the foothills of Mount Hermon. It contains a massive rock face that is still there today. 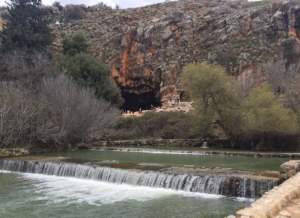 That rock face held religious and political significance. It had been a place for the worship of the ancient god Ba’al, god of the storm. Then it was a place sacred to the worship of Pan, the Greek god of wildness, woods, and sexuality. And then, in the time of Jesus, the site had become a monument to the conquest of the region by Rome. Herod built a temple there to Caesar — and so for Jews, this site was a bitter reminder of of the triumph of Roman power.

Peter called Jesus “Son of the living God.” That was treason. “Son of God” was a title reserved for the emperor, wielding power by divine right.

“Messiah, Son of God.” Those same words got Jesus killed. Religious leaders brought him to trial. At the turning point, the high priest said to him, “I put you under oath before the living God, tell us if you are the Messiah, the Son of God.” Jesus replied, “ ‘You have said so. But I tell you from now on you will see the Son of Man seated at the right hand of Power and coming on the clouds of heaven.’” (Matt 26:64)

That answer sent him to the cross.

Right after Peter calls him “Messiah, son of the living God,” Jesus tells the disciples, for the first time, what will happen to him. That he will suffer, be killed and rise again.

In Jesus’ own day, there were many answers to that question. His disciples called him Teacher, Rabbi. His opponents called him a blasphemer, a heretic. His critics called him a glutton and a drunkard.

Christians have had many answers to that question.

It’s a question that takes us to our foundation. For three centuries, Christians struggled and fought and sometimes killed one another to work out an answer they could agree on and that’s what the creeds are — the church’s effort to say who Jesus is, and how Jesus can be God for people who worship one God, not three; but one God who IS three.

Before the creeds we use got written, early Christians used a shorter one in their worship. “Who do you say that I am?” Their answer was the three-word creed, “Jesus is Lord.”

Jesus is Lord. It’s still a good answer. Jesus is Lord, calling us to turn away from all our own false gods — money, success, power, security, self-improvement, even religion itself. Not Donald Trump. Not Joe Biden. Not even Anthony Fauci!

Where is that God at work in this time of pandemic, when we are separated from one another; worn thin with pandemic protocols; frustrated and angry and fearful about what is happening to our country?

That God meets us at the cross. The place where we come face to face with who we are — and who God is. The place we come to when we get all the way down to rock bottom, to stand again on solid rock.

Thanks be to God. 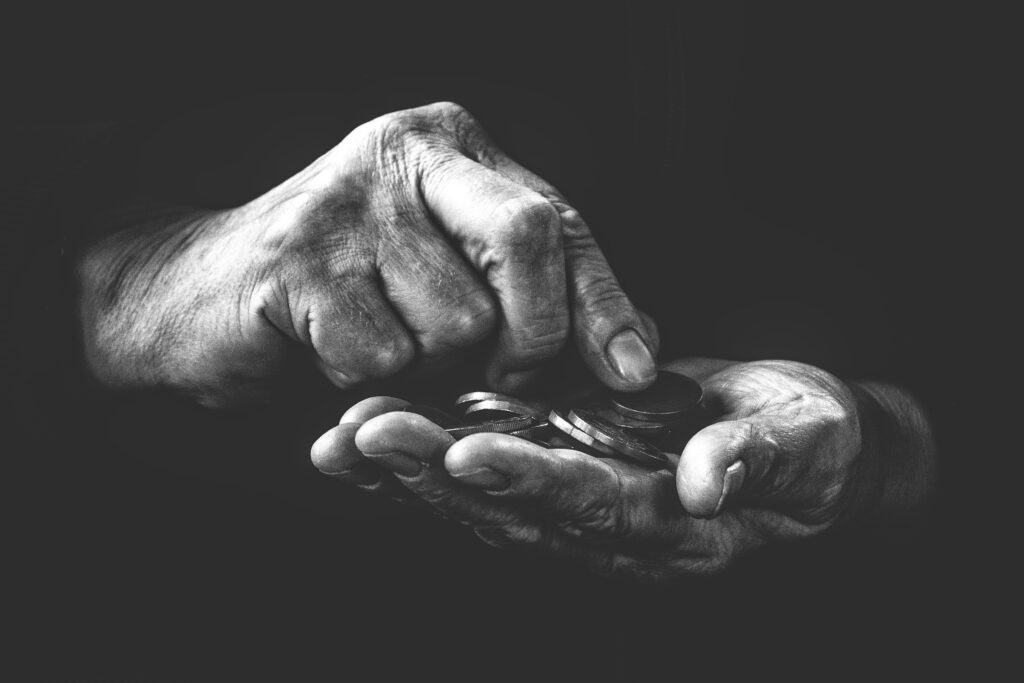 Today’s message: ‘Justice Deserved’
Jesus says forgiveness is like canceling a debt that someone can’t pay. In today’s message, Interim Pastor David Mueller talks about that and how the forgiveness we have received must inform the way we forgive others. “We may not be murderers, thieves or gossips, and we may give generously of our time and treasures. We may not be America’s most wanted. But when one looks at the comparison between crooks and people like us, the distance from God’s perspective might not be that much. We each and all owe God infinitely more than anyone else owes us!”

Read More
John Lasher’s guide to St. Mark’s new ‘livestream’ worship option
St. Mark’s is going live on Sunday, September 6! That’s the day we will reopen the church building in a limited capacity and begin to worship together in person. This will also change how our services are presented online, since they will no longer be prerecorded, but streamed live, in real time. Here, John Lasher explains how to view our live services, which will begin at 10 a.m., and how to access archived recordings of previous services.