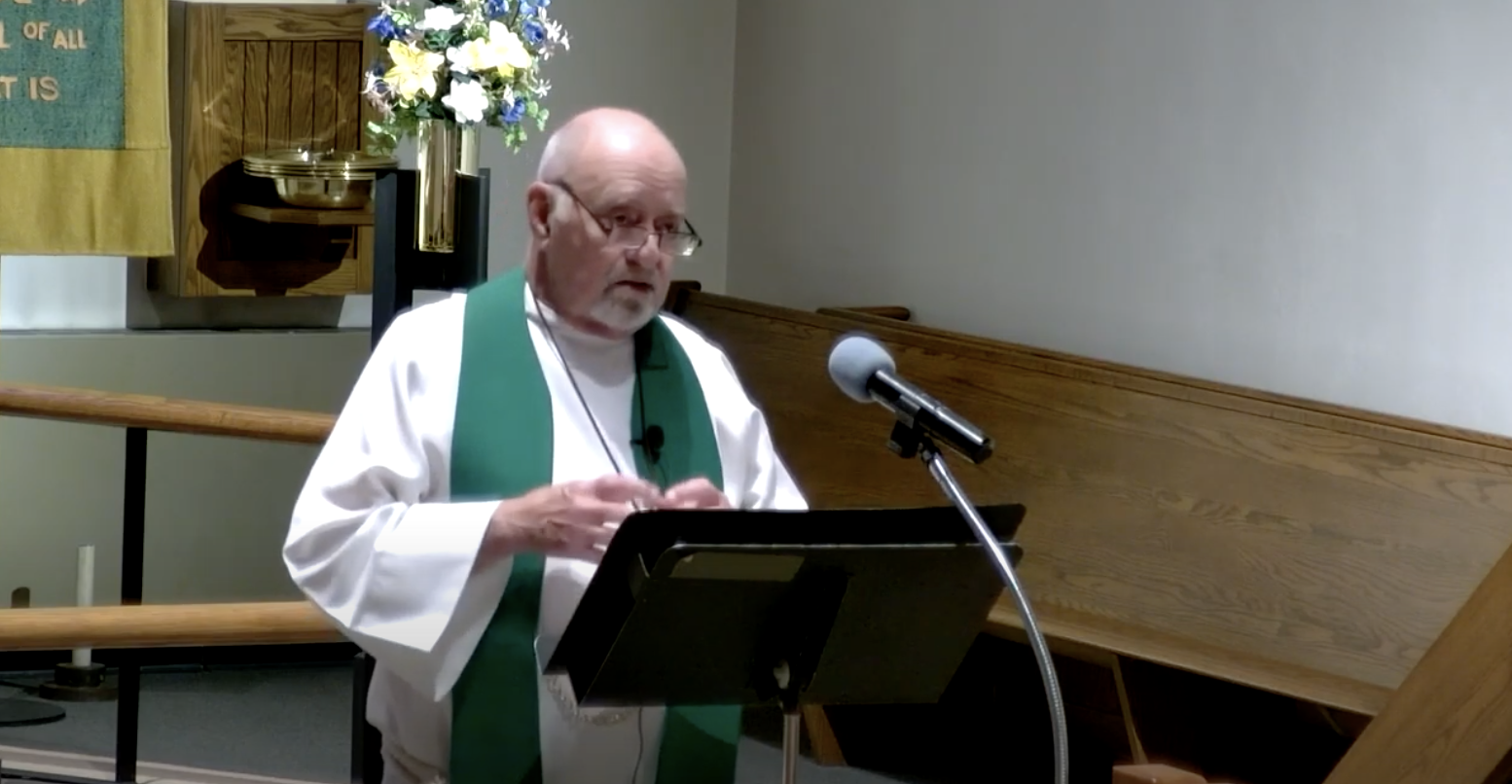 Editor’s Note: Happy Father’s Day! We join together again at a common time — 10 a.m. — with hopes of doing so in person soon. If you have arrived here later than that, the link to the prerecorded service on our YouTube channel will still work.

We are thankful to Interim Pastor David Mueller and John Lasher, director of music and worship arts, for their faithful delivery of these services that have kept us connected even while our building is closed during this Coronavirus pandemic.

Bishop [William] Gohl was to have been with us virtually today, but he prefers to wait until he can visit with us physically, which all of us hope is sooner than later, even if we are prepared to wait until the disease diminishes.

Our second lesson from Romans 6 is one most of us are familiar with if only because it is traditionally read at all baptisms.

Before moving on, we pray:

“Lord God, Heavenly Father, help us this day to remember and be renewed in our baptisms. This “rebirth” — like birth itself  need not be and cannot be remembered as usual. We did not choose our rebirth any more than we chose to be born to begin with. Just help us, O Lord, to know that You called us by name, made us Your own and promised never to leave nor to forsake us because of Jesus Christ. In His Name we pray and say “Amen!’”

The first insight I need to share with you is about prepositions and their importance in Scripture. In Paul’s letter, Chapter 6, it is especially important to note them.

Notice the preposition “into!” We are baptized INTO Christ Jesus and INTO His death.

In other words, in baptism we are drawn back to Christ’s death and, as we shall see, Christ is drawn forward to our lives now. It is all an extremely close encounter of the spiritual kind.

The question this occasions is: “How then shall we live?” If we are WITH Christ and were baptized INTO His death, what does this mean in this life and the next?

There are those in history and now who would answer this question in a behavioral way. Being IN Christ, we behave differently and better than we would otherwise. To some extent we should genuinely hope that is true. I would certainly like to think that not only in whom I believe but how I behave is vastly influenced by being IN Christ. That, however, has its limits and its downside.

Werner Elert, a German Lutheran pastor, theologian and ethicist, after World War II, wrote that we Christians lift up an ethic to which we cannot possibly attain. We can never come close to being or behaving like Jesus. Martin Luther is often quoted for having said: “Sin boldly!” Before we experiment with that one, please note that he was speaking to those who felt they did not sin boldly and about how important grace and forgiveness are in the face of our sinfulness. Paul, a little later in this letter (7:19) wrote: “I can will what is right, but I cannot do it. For I do not do the good I want, but the evil I do not want is what I do.” While in a way that may sound like double talk, Paul is serious about openly sharing his reality.

If on the one hand Paul invites us not to continue in sin but goes on to admit that he continues in sin, even if he does not want to, what does this mean for us?

Sin most typically is understood as either bad behavior (commission) or as good behavior avoided (omission). Once again, we must stress that to some extent our behavior is influenced by being “en Christo” (in Christ). But is behavior what Paul is referring to here, and —if not — what in God’s name is he talking about?

I believe and many theologians are with me on this that Paul is here speaking of condition of relationship. Sin is brokenness with God and others. We are not to live in a broken but in a forgiven state. In Christ, our broken relationship with God is healed. God remains God and I, with all of my faults and sins, remain who I am. I am still not near perfect in anything, especially my behavior. With the relationship healed, God’s grace constantly flows with forgiveness toward and into me, having me live not in sin but forgiveness.

Maybe a pertinent metaphor would help.

It is Fathers’ Day! I love our children and they love me. I trust my bad behavior is at an absolute minimum especially as it regards my flesh and blood. I would never intentionally harm any of the three of them. I have sought nothing but their good even during those times I had to be firm. You might best be served by asking them about my imperfections. I could share with you about theirs.

But our love for each other is because of the relationship and not just the behavior. Our love is not just familial (phileo) but unconditional (agape). It can be damaged by bad behavior just as it can be affirmed by better behavior, but only in extreme instances can it be damaged, leaving permanent scars.

When Jesus encountered the adulterous woman in John 8 — followed by a crowd of Pharisees and others with stoning on their minds and hearts — He spoke of the one in the crowd having no sin getting to cast the first stone. By their own silence, not one of them stood the test. Jesus said to the woman: “Go and sin no more!” There are those who act as if Jesus said: “You are forgiven; go and sin some more!” Obviously, what Jesus actually said with “sin no more” had implications about her lifestyle or what we might more accurately call her “deathstyle.”

We are not forgiven so that we can misbehave, but are forgiven because we know where forgiveness can be found when we do misbehave. In the meantime, who among us would argue about good behavior like loving God with all of our hearts, souls, strengths and mind and our neighbors as ourselves? Go and sin no more! 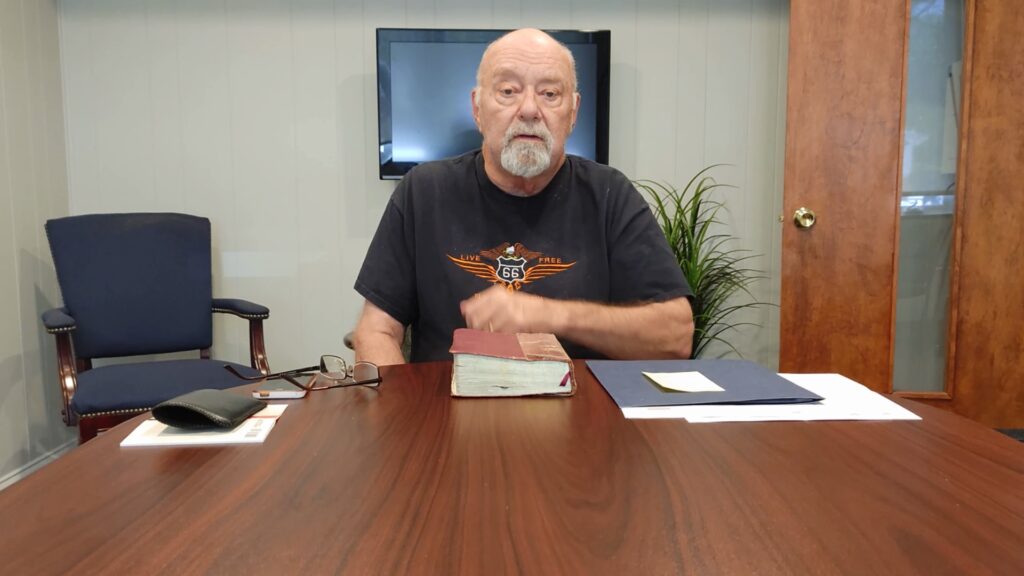 The Midweek Extra for July 15
He called for questions — and you are sending them! This week’s “St. Mark’s Midweek Extra” — an informal, half-hour video hosted by Interim Pastor David Mueller and produced by John Lasher — focuses on the social statements of the Evangelical Lutheran Church in America (ELCA), the denomination St. Mark’s is part of, and what it means to be a congregation in the ELCA. Pastor also talks about Christian sexuality in an increasingly permissive society.

Read More
Today’s message: ‘The Messy God’
God does the things God does — whether flinging seeds in reckless fashion or allowing weeds and seeds to co-exist. In the familiar Psalm 23, we hear of cups running over, making a real mess on the table. God can be and often is quite messy.

Read More
St. Mark’s Midweek Extra starts today!
Here’s your chance to listen in as Interim Pastor David Mueller tackles questions you have and shares his perspective on the past, observations on current events and ideas about the future. We’re calling it “St. Mark’s Midweek Extra” — a half-hour video hosted by Pastor Mueller and produced by John Lasher — and it starts TODAY. Check it out!