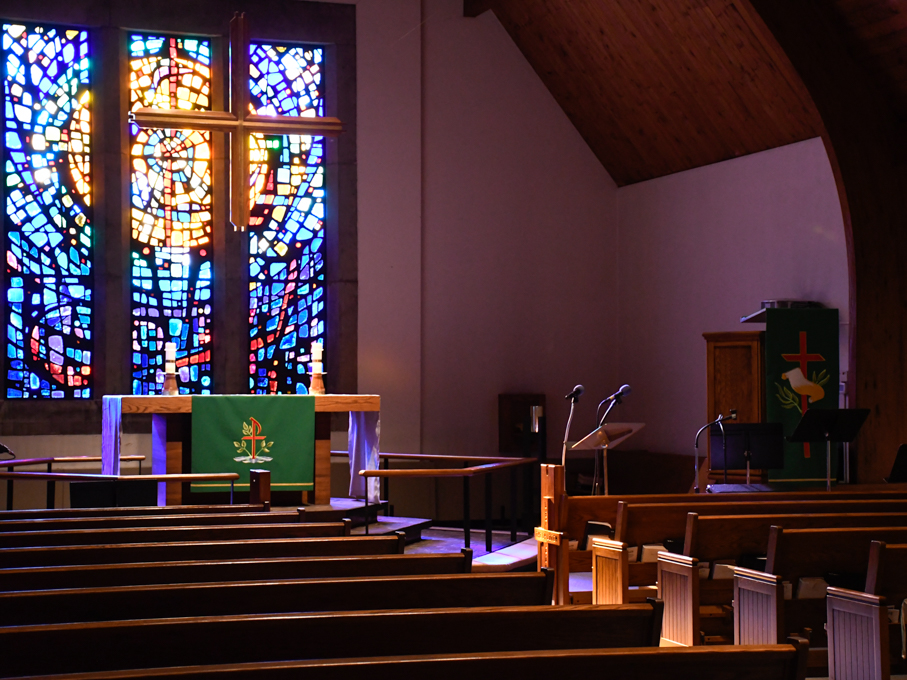 A small group of neighbors — 90 or so — came together in northern Delaware in the early 1940’s with a plan to start a Lutheran congregation in the Bellefonte area. With no building, an agreement was reached with Brandywine Hundred Fire Company and its second-floor social hall became the fledgling congregation’s temporary home. The first service was held on Jan. 11, 1942. 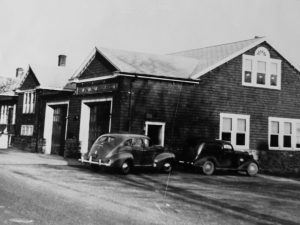 This was an alarming situation at times — when emergencies arose, sirens went off and the fire trucks got rolling from the bays below. The preacher would be drowned out, pause for a while and start up again when the alarm bells stopped.

It was not optimal by any means, but the little congregation took root. They invited friends and neighbors to worship with them, they worked to nurture this new family of faith and the little church began to grow.

After a few years, meetings were held to determine whether the church could establish its own building. The money just wasn’t there.

Local contractor Fred Krapf Sr. offered to build a church on the Duncan Road property the small congregation had purchased — following the example of another contractor, who was helping a Maryland congregation build its church. He offered to provide skilled labor if church volunteers would help with the rest of the project. And they did. Ground was broken on May 7, 1950. Men, women and children worked, worked and worked some more — all playing their part in labor, supplies, hot lunches and assorted other supports. 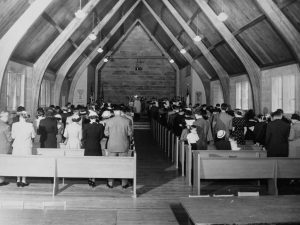 The building finally was completed and the first service was held on Christmas Eve, 1951. There was no heat in the building yet, but people kept their coats on and savored the great work God had accomplished through them. It was a joyous and hopeful time.

The congregation grew and thrived and loved the little church, built with their own sweat equity with no mortgage to fret about.

From the fire hall into the fire

Trouble came, though, in May of 1969, when a horrible fire swept through the church, devouring much of the structure inside.

Many stood along Philadelphia Pike and watched the horror. 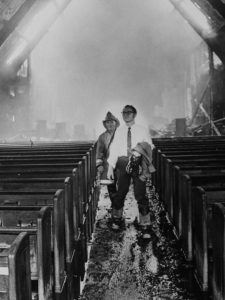 “An eerie moaning sound — caused by the heat of the fire forcing air through the pipes of our organ — filled the air,” Terry Biesinger Olsen, a charter member, wrote in a history for the 70th anniversary celebration in 2012. “We stood with many other members of the church, all with tears rolling down our faces.”

The little church was badly wounded, and the loss affected the greater community, too. Gifts were made, help was offered. The beautiful Madonna statue in our narthex — crafted by sculptor Charles Parks — was donated anonymously after the fire. And one St. Mark’s member, Albert Torp, created the cross that now hangs over our altar from pews that were salvaged from the scorched sanctuary.

Major repairs and renovations were accomplished to reopen the church and other projects have followed. The narthex was expanded in 2003. Recent renovations have included new windows, upgraded nursery facilities and significant upgrades in our kitchen. 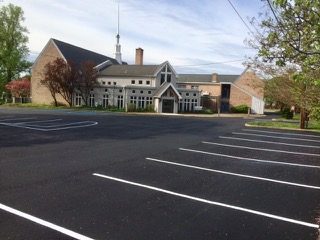 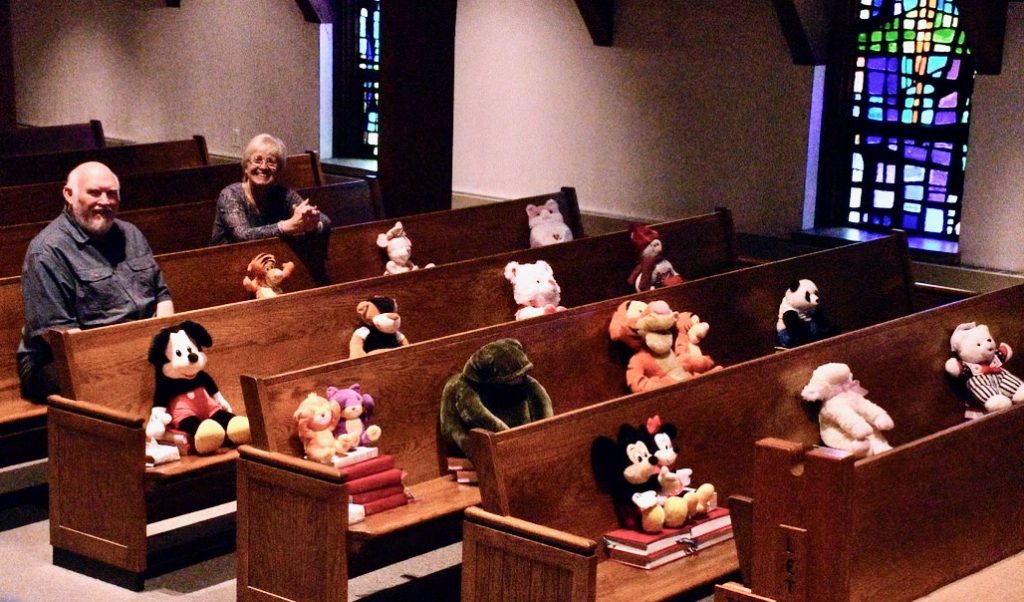 Missing St. Mark’s? A ‘critter congregation’ has saved your seat
Our pews are much too empty during these days of the COVID-19 pandemic. The sight of them gave Cindy Maser an idea and a most unusual thing happened last weekend. “In these increasingly difficult and sad times, we felt a little fun might help!” Pastor Mueller said. “So while we cannot get to church these days, my good friends Larry the Lamb and Leroy the Lion invited a few of their friends to come by.”
Read More
“He gave him no answer, not even to a single charge:” Palm Sunday message from Pastor David Mueller
[Editor’s note: We thank Interim Pastor David Mueller and John Lasher, director of music and worship arts, for recording this Palm Sunday message during this time of Coronavirus pandemic, when we cannot meet together. You can read the text, download the hymn sheet music and hear the audio by clicking on “read more” below.] “I have believed for a long time that a most significant scene in this Passion Drama is Jesus standing before Pilate. Freeze frame this image for a minute or two. Just stare at it: A Representative dignitary of the then most powerful Empire on the planet, sent to Palestine precisely because he was so good at dealing with crises, and The Son of God sent to this world precisely because God so loved the world, facing each other. Stare some more at both men, one having at his hand the power of empire; the other whose power was made perfect in weakness.”
Read More
‘Where Were You Lord?’ Sunday message from Pastor David Mueller
[Editor’s note: Again this week, as we remain separated by the Coronavirus pandemic, Pastor David Mueller has recorded a message for this week, the fifth Sunday in Lent, with special music at the end. Pastor’s message is drawn from John 11: 1-45. See the full text and get a link to the audio by clicking “read more.”] … One of the issues we take hardest when it comes to the promises of God is the time it takes for God to get things done. Even back then, now was too late.
Read More